The inspiration for this project came from Graffiti Alley, a cut-through alley with walls covered in graffiti on Massachusetts Avenue in Cambridge, which many of us frequently pass by. So, one day we wondered: why not generate graffiti designs using AI, and collaborate with local artists to bring AI’s dreamed-up creations into reality, right by the Graffiti Alley? 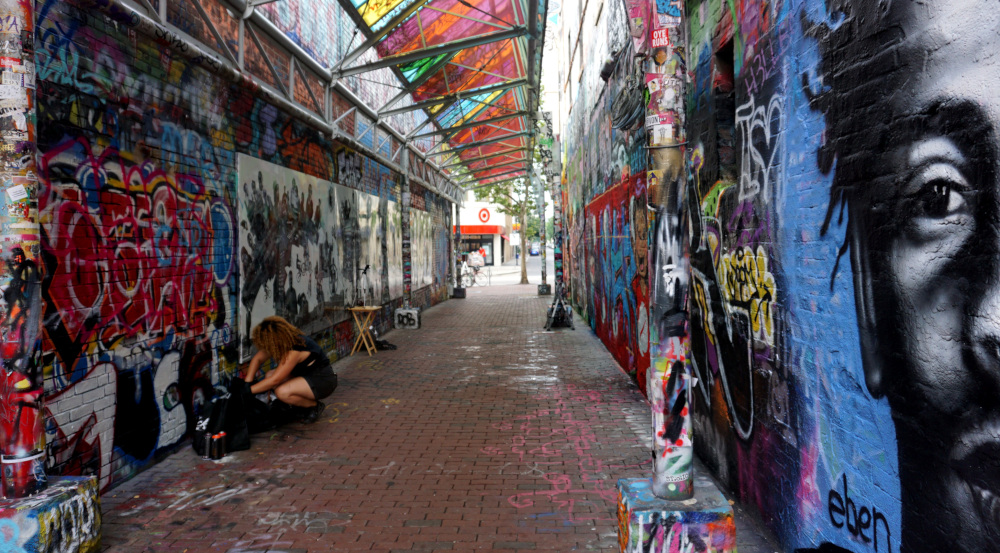 Graffiti Alley in Cambridge, a continuously evolving alley where dozens of artists come by to paint everyday.

Similar to what we did in Episode 3 where we created human-AI collaborated fashion, the plan was to curate a dataset of graffiti, and train a GAN to generate new graffiti designs (and hope that the AI’s dreamed-up creations would inspire our graffiti artists). We collected over 10K graffiti pictures taken all over the world, and trained a GAN to generate new designs. After a week of training the model, we ended up with some pretty cool designs that resemble graffiti (see below).

As you can notice, the AI didn’t learn how to form letters very well – it would probably do a much better job with more training (or more GPUs), but we had to stop the training after a week due to the budget constraints –training PGANs are expensive! Since we want this to be a human-AI collaboration, it seemed like a good opportunity for artists to get inspired from the overall look that the AI dreamed-up, but re-interpret the letters based on their experience and artistic perspective. With that in mind, we contacted with two graffiti artists and asked them to get inspired by the AI to paint some graffiti in Graffiti Alley!

IMAGINE (Sneha Shrestha) is a Nepali artist who paints mindful mantras in her native language and meshes the aesthetics of Sanskrit scriptures with graffiti influences. Being the first to mesh Nepali Alphabets with American graffiti, she has shown her work in several exhibitions, commissioned works and public walls around the world. 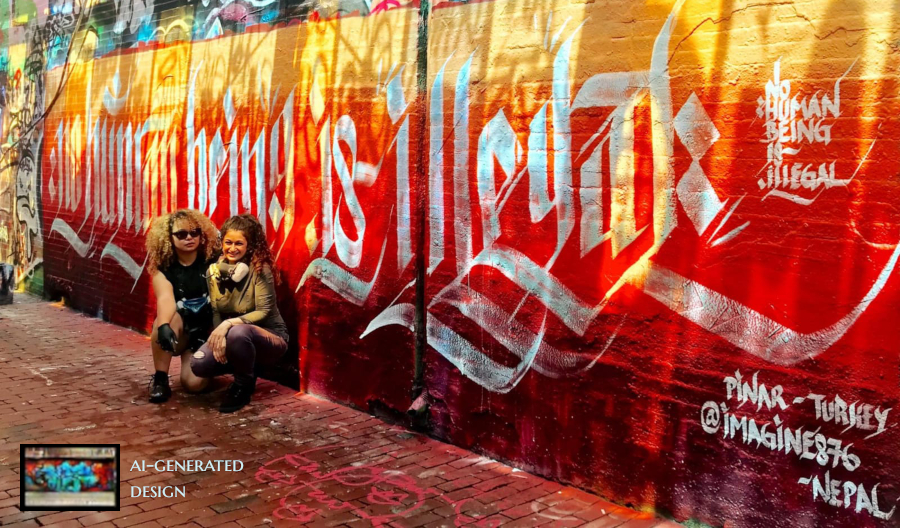 IMAGINE and Pinar are posing in front of the human-AI collaborated graffiti in Graffiti Alley, Cambridge.

We showed IMAGINE a dozen of AI-generated designs, and she really liked one of them with a red background and blue letters. She used this coloring scheme to write a powerful message; NO HUMAN BEING IS ILLEGAL. This message raises a legitimate point and issue, since the term “illegal immigrant” dehumanises people who are denied the opportunity to obtain authorisation –btw, both IMAGINE (Kathmandu, Nepal) and Pinar (Istanbul, Turkey) are immigrants! This also sets a wonderful example of human-AI collaboration: AI can generate inspiring color schemes, but it takes an artist to come up with a powerful message. 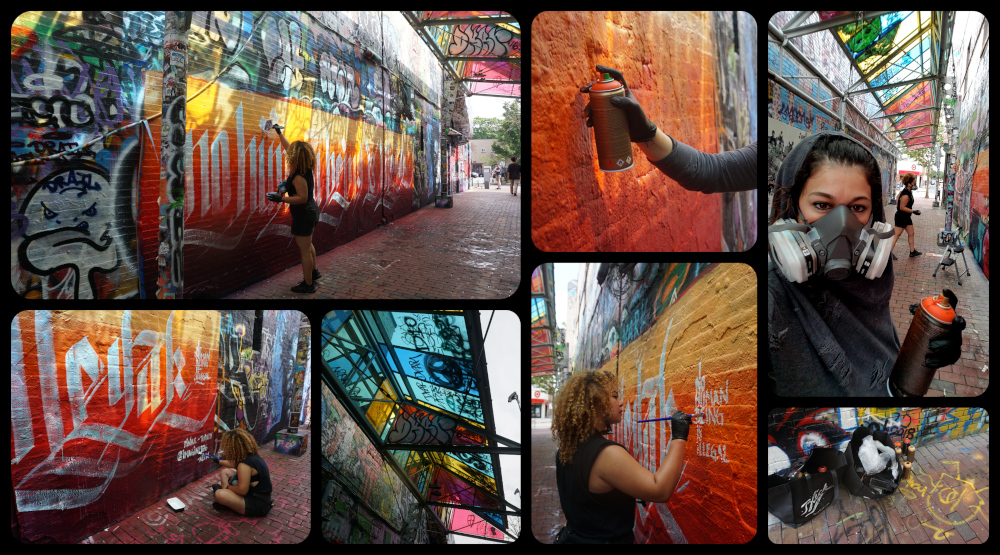 IMAGINE is working on her AI-collaborated graffiti piece (she kindly invited Pinar to paint some of the background as well, yay!)

What does IMAGINE think about this human-AI collaboration? (This is a transcript from our interview).

When you reach out to me, I was just like 'yes!'. I didn't have to think twice about it because I think it is such a cool way to bring art and technology together. And, the machine 'learning' from 10,000 graffiti pieces, and creating a bunch of designs... and then I am looking at one of those designs, and then creating a piece here... mind blowing!

SOBEK (Jeremy Harrison) is an illustrator, portraitist and large scale muralist from Boston, and paints graffiti since 1997. His son, a graffiti artist in training, also helped him paint the human-AI collaborated graffiti piece – which makes him the youngest collaborator of our project!

We showed SOBEK a dozen of AI-generated designs, and he picked one of them to paint. He said that he sees ‘ART’ letters in the AI-generated design and going to paint it on the graffiti (while also sneaking ‘AI’ letters within the whole color scheme). He also said that in United States, the graffiti style usually have sharp letters, very direct and bold –but less abstract. But he said that there are artists in Europe where their style is similar to the style AI came-up with where the graffiti is like a jungle and you are trying to find out where the letters are. But SOBEK also added before starting to color the graffiti: “I am waiting to coloring this in. I am just going to be smiling all the time. So many beautiful colors!” 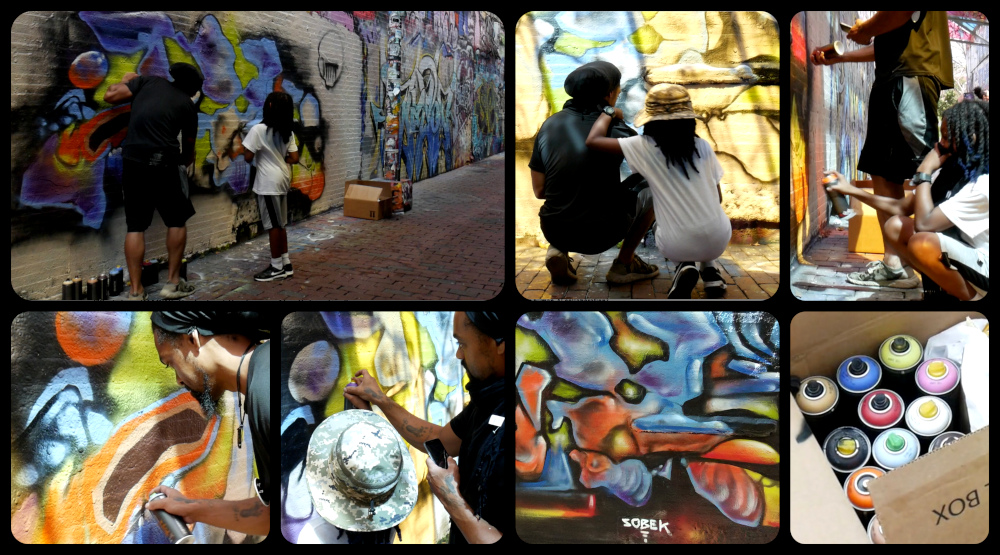 SOBEK and his son (our youngest collaborator) are working on human-AI collaborated graffiti piece.

What does SOBEK think about this human-AI collaboration? (This is a transcript from our interview)

I think it is interesting. I spoke with some of my buddies about this little project and they see it as "me vs. AI", like "man vs. computer" -- they took it a little personal like 'You gotta defend the history of graffiti, don't let the computers take over!' So it opened up a fun dialog between me and my art buddies. Personally, I think it's cool! But I think the AI will never feel how I am feeling while painting this right now. But creativitywise, I don't think artificial intelligence can be as creative as a person -- you know, our brain is just expressing ourselves with art!

Special Thanks to Olivia Huang

Special thanks to Olivia Huang for videotaping SOBEK’s work. You can visit her website to learn more about her film/documentary projects.

Do you want to collaborate with AI?

Is there an AI-generated graffiti design that you like? We invite you to get inspired by the hallucinations of the AI. Send us pictures and videos (or just sketches), and we will add them here! 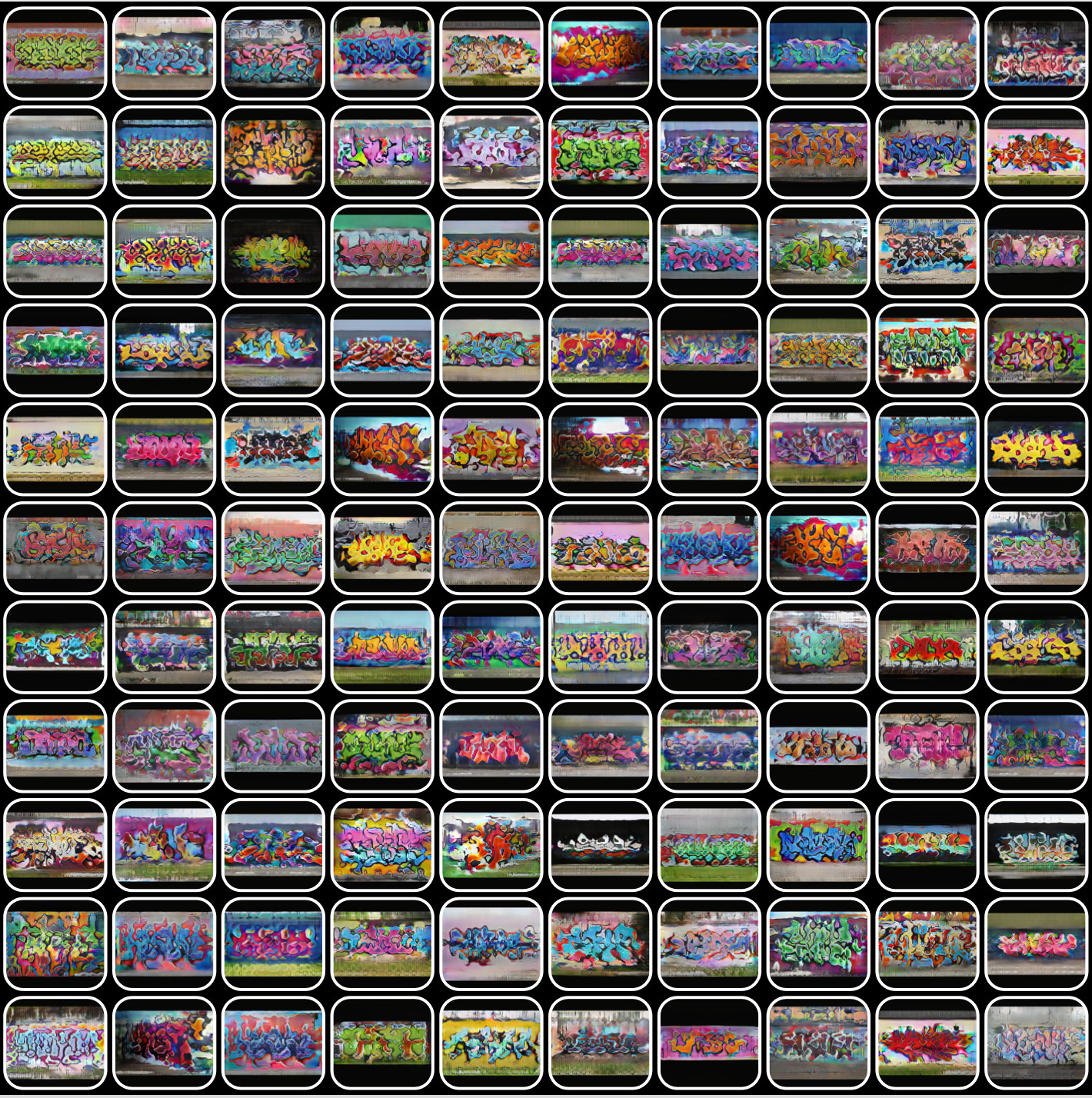 While working on the graffiti designs, we noticed an AI-generated design that resembles Picasso’s famous work, Guernica. Our first attempt was to see what happens when we use the AI-generated graffiti as a style and apply Neural Style transfer on Guernica. As you can see below, it worked pretty well! Then, we collaborated with Yashvi Singh, a painter, and a graduate student at Stanford to combine Guernica and the AI-generated graffiti, and she created an amazing piece! 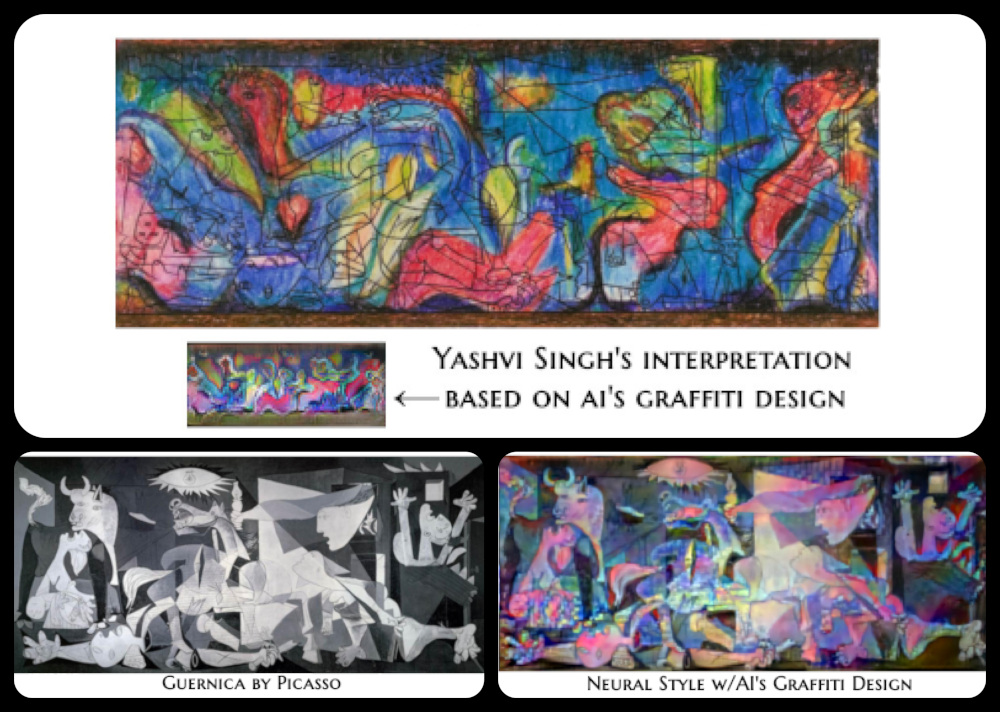 Special Thanks to Chopper

Chopper is the graffiti artist AI that generated the inspiring graffiti pieces in this episode. Similar to his namesake, Chopper is hoping to challenge authority by making his mark in increasingly more ambitious and public locations.

Note: Chopper’s profile picture is also dreamed-up by an AI. 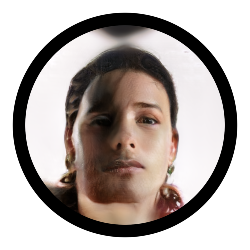 Do you have comments on this episode? Feel free to share them on Medium or send us an e-mail.